The Diary of Kenneth Macrae 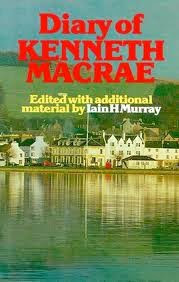 The Diary of Kenneth Macrae
edited by Iain H. Murray

Any man, aged eighty at his death, having a procession a quarter of mile long, consisting of men only, and following his coffin to his grave, deserves some attention.

Rev. Iain Murray has, for The Banner of Truth Trust, edited Mr. Macrae`s diary,covering a period of his fifty years in the Christian ministry. The diary appeared in book form, 535 pages, in the year 1979, but sadly, it is now out of print. This reviewer makes no apology for having read the diary four times.

Kenneth Macrae was born on November 4th. 1883, in Dingwall, Ross-shire, Scotland. His earliest memories were of Fort George, the military garrison on the Moray shore. His father was a recruiting officer for the Seaforth Highlanders. In 1899 Macrae entered the civil service, obtaining a first class certificate in electricity and telegraphy.

His conversion took place in this manner: he writes, “I went from church to church, and got nothing. God took His own way of liberating me”. In 1964, he again wrote, “I hereby put on record, that since the LORD, in His sovereign mercy, entered my heart on the lonely summit of Bell`s Hill in the Pentlands, on that memorable afternoon - 9th. August 1909 – I have ever sought to serve Him as my only LORD”.

Macrae attended St. Columba`s Church in Edinburgh, and entered the university in 1911, and the Free Church College soon after. In 1915 he was called to the Free Church congregation of Lochgilphead, which lies on the shores of Loch Fyne. This is how Macrae sums up his eight years of ministry there: “Thus ended the most blessed time I have ever had in my life. I had been inclined to think that the LORD was so grieved by the sins of His people that he had ceased to evidence gospel power in any marked degree. This is a great lesson for me: the power of prayer. Blessed be the LORD for giving such a wretched sinner such a sight of His power”.

Mr. Macrae went on to be the minister at Kilmuir in Skye from 1919 to 1931, where he experienced much blessing from God. From 1931 until his death in 1964, he exercised his outstanding ministry in Stornaway on Lewis, where hundreds of young people, for two generations, loved him, and waited on his ministry from Sabbath to Sabbath, as if spell-bound.

What was the secret of his power over the young? Was it compromise in matters of doctrine and worship, so common today? No, it was a strict faithfulness to the Word of God and the doctrines of grace.

But, like Daniel of old, he often had to plough a very lonely furrow, and pay the price for his convictions, but he was always the stalwart Christian gentleman, calm in debate, and honest in self examination. Macrae was truly a champion of the Reformed Faith, who loved reverent worship, and the singing of unaccompanied Psalms exclusively in worship.

Now he has gone to his reward, and who will take up the Macrae mantle today? Has God His man hidden somewhere in a prison as Joseph was? How urgent the need to train young ministers in the Reformed Faith today, and so we should pray with the
psalmist:

Instead of those thy fathers dear
Thy children Thou mayest take,
And in all places of the earth
Them noble princes make.